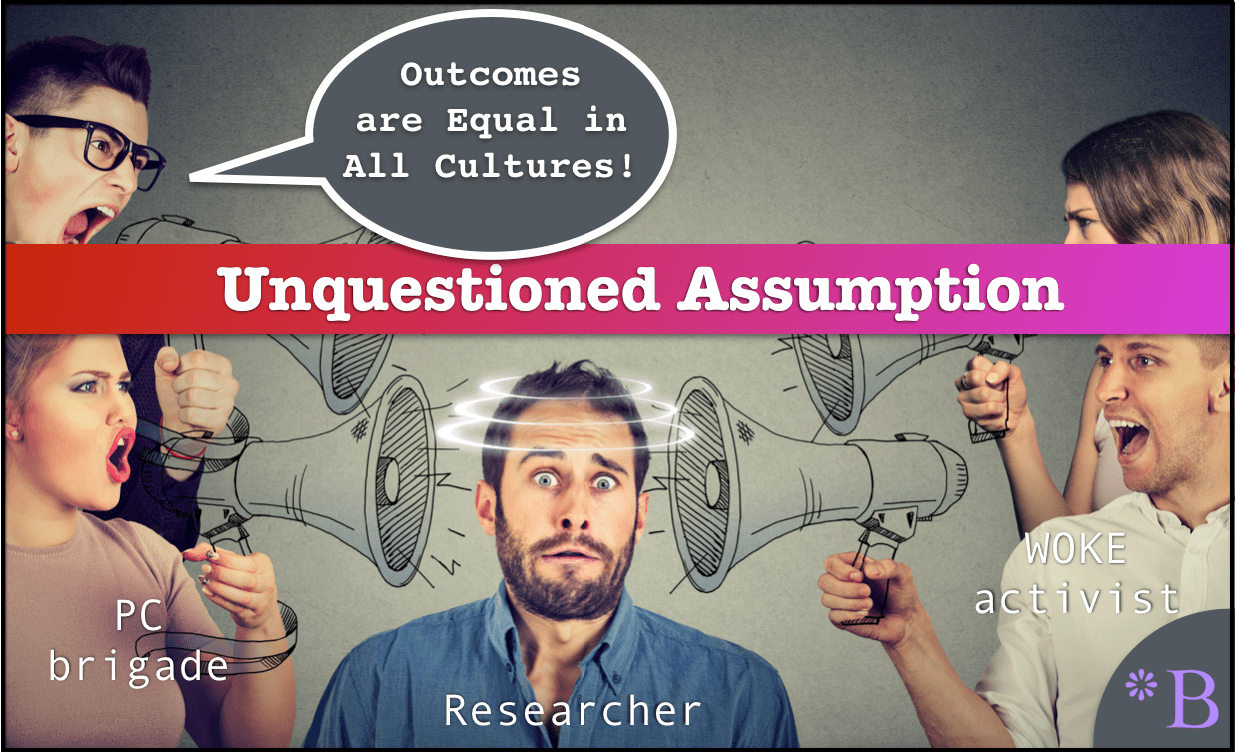 The assumption of equal outcome for all cultures is a recent assumption — but it is considered now the bedrock assumption that all “good people” and all “enlightened” people are required to believe. Interestingly, it is an assumption that has no evidence to support it, which leaves people to grasp at straws to try to assert its truthfulness.

A Typical News Piece Which Accepts the Equal Outcome Assumption

The following is an interesting interview on the online news show The Hill. Please watch the video and then see the following analysis.

The Analysis of Southern Reconstruction Was Flawed?

The historical present the reconstruction view as flawed in that it critiqued black governance.

But wait, didn’t the outcome from black governance of cities like Detroit and Baltimore and countless others, as well as in all of the African countries reinforce the claims of the inability to effectively govern that are being contradicted in this video?

What Happens Under Black Governance?

Black run cities like Detroit, Baltimore, Cleveland, etc. had substantial infrastructure that was built by Europeans literally handed over to black governance. Black governance could not only not build on what was created before by a different culture, and they could not maintain it.

Business after the George Floyd riots in Minneapolis.

Blacks have an established pattern of ruined cities. Minneapolis is now in a long-term decline because the percentage of the population that is black in Minneapolis is black. Interestingly, the entire outrage around George Floyd — is based upon a false claim of disproportionate racial police treatment as we cover in the article Why the Claims by Black Lives Matter on Police Shootings Are False.

All black run cities that were previously white have gone into a steep decline.

South Africa — the “Rainbow Nation” has recorded the most significant decline by a country that has not been invaded by a foreign power.

Under black governance, South Africa is now a world leader in rapes. It has been argued that South Africa is still recovering from when the Dutch/whites plundered the country. However, if the great decline of South Africa happened after the ANC took power, then how could that be due to Dutch/whites plundering the country? As we cover in the article How Deloitte, McKinsey, the Guptas and SAP Ripped Off Eskom South Africa has had corruption scandals like it never had before in the history of the country.  If corruption has greatly ratcheted up in South Africa after the ANC took the reigns, how is that placed on colonialism or white rule? Under the De Klerk government, the South Africa power utility, called Eskom, ran very well. Under the ANC, as we cover in the article How South Africa’s Decline Mirrors the Decline of Eskom it has become an inefficient, corrupt example of public capture. How can this enormous decline be placed at the foot of the previous political regime when it was very well run prior to the new regime taking power?

Tourists no longer flock to South Africa as they once did because they fear the violence and property crime in the country. The top growth industry in South Africa? Personal security firms.

A Rainbow Nation for All Races?

A single Rainbow Nation — at least for blacks? Not so fast. African immigrants to South Africa are now targeted by South African blacks.

Even blacks move away from cities that are run by blacks.

Virtually the entirety of how blacks have improved their condition is by moving to white-controlled or governed areas. However, while in these white areas, they constantly complain about discrimination.

Why then do blacks constantly seek white areas to move to, regardless if those areas are in a different country or in the country they already inhabit?

MLK Had a Dream of Equal Outcomes?

Martin Luther King presented the idea that American blacks deserve equal outcomes to whites. However, what black governed society has, that is in recorded history, matched the outcome of white or European societies? If there is no historical precedent for this, why is it accepted as a baseline assumption? Naturally, if your performance is not that of another groups’ it is desirable to dream about having the same outcome. However, if the capabilities are not the same, then the outcome will not be the same.

And there is something else. The fact that blacks do so much better in white or white run societies than black run societies means that blacks are benefiting from the society building capabilities of whites, but pulling down those societies. Blacks seem to assume that whites are the ones that benefit from their presence — and the whites are exploiting them. However, if blacks to better in white societies, this means the opposite is occurring. Without whites, blacks cannot maintain Western infrastructure, a Western legal system, complexity like servers (most websites in Africa are hosted not in Africa, but in the US), and a host of other things that blacks tend to take for granted.

It appears that this historian’s analysis works from the equal outcome assumption/hypothesis.

This is a comment that I received in reply to the observation I made.

Free blacks did not have the problem of miss governance during Reconstruction period. Today we have liberalism and a global economic system which shuts out emerging markets in Africa.

Here the blame is put on an economic system that prevents African countries from developing.

However, what is the evidence for this?

Taking A Comprehensive Present and Historical View of Black Governance

There are some anecdotes around positive aspects of black governance during reconstruction — but they are somewhat fleeting. If we look at black governance around this time in the back to Africa movement that led to the creation of Liberia and the creation of the first black steamship line (to take black Americans to Africa), those failed as we cover in the article Did African Americans Enslave Liberian Africans?

I am not trying to support any group subjugating any other group, and clearly, many of the behaviors of whites after the Northern occupation ended were not right.

However, if the claims around black evolution in reconstruction are true, they are a complete anomaly with the history of black governance.

The Litany of Undending Excuses

There are a lot of excuses being made for black governance. Let us review some of the common ones.

Africa is a Governance Failure Because of Liberalism or Neoliberalism from the West?

I would like to point out that Africa’s biggest problem is overpopulation – and this has nothing to do with liberalism or the World Bank. African leaders/citizens are disinclined to listen to advice from Westerns about birth control and sustainability.

See the following video on the enormously unsustainable reproductive rates in Niger.

The Failures of African Nations After Independence are Due to a Western Conspiracy Against Africa?

The failures of African in infrastructure, sanitation, etc. – is not because of Western domination. It is because African nations refuse to follow the standards of the West. Many African school districts can’t figure out how to keep their books dry and warehoused properly. Is that some plot from Washington DC or a local issue?

It is instructive to speak to those that work at NGOs to get a rough idea of how frustrating it is to get African leaders to do anything that benefits their citizens. But if we go back in time before there was any interaction between blacks and Europeans, so before the slave trading, then we don’t find those societies to have been much beyond hunting/gathering, very low-level societies in terms of development.

We cover in the article The Economist Misleads Again on Tanzania Versus Acacia Mining, how mining companies steal tax revenue from African countries. However, these same resource extraction firms do the same thing to the population of the developed world. BP, Chevron, etc — are constantly ripping off the US taxpayers by paying tiny amounts for the oil they pull from public lands while violating pollution laws. That is, there is nothing special or different about how resource extraction firms treat Africa.

African Countries Are Worse or Better Off from Colonialization?

I performed this analysis in the article Why Do the Most Europe Influenced African Countries Have the Least Slaves, that demonstrated that the more an African country was colonized, the better off it is today, and the more rights the people in that country had. This is because all of the rights we know of today are creations of European societies. Africa had no concept of freedom of speech or non-slaveholding or laws beyond what the chief determined, separation of powers, or any other rights that we now hold to be sacrosanct in Western societies. This evidence contradicts the logic presented by African leaders that colonialism disadvantaged those countries that they were made worse off by colonialism.

The problem is that the assumption that African/black societies lead to equal outcomes with other societies has either little to no evidence to support it. This assumption is presented here by the historian. However, without evidence, how does anyone know this is true? Because we all want it to be true? Does that make something true — if it is PC to think it is true?

If assumptions — particularly assumptions for which there is no evidence cannot be questioned for PC reasons, then the field is not intellectual. It is doctrinal. However, this assumption cannot be questioned — and this article could not be published in any establishment media entity. However, the data is irrefutable. Simply take a Google Sheet, and list black run cities and countries in that sheet, then observe the outcomes. The data points tell the story.