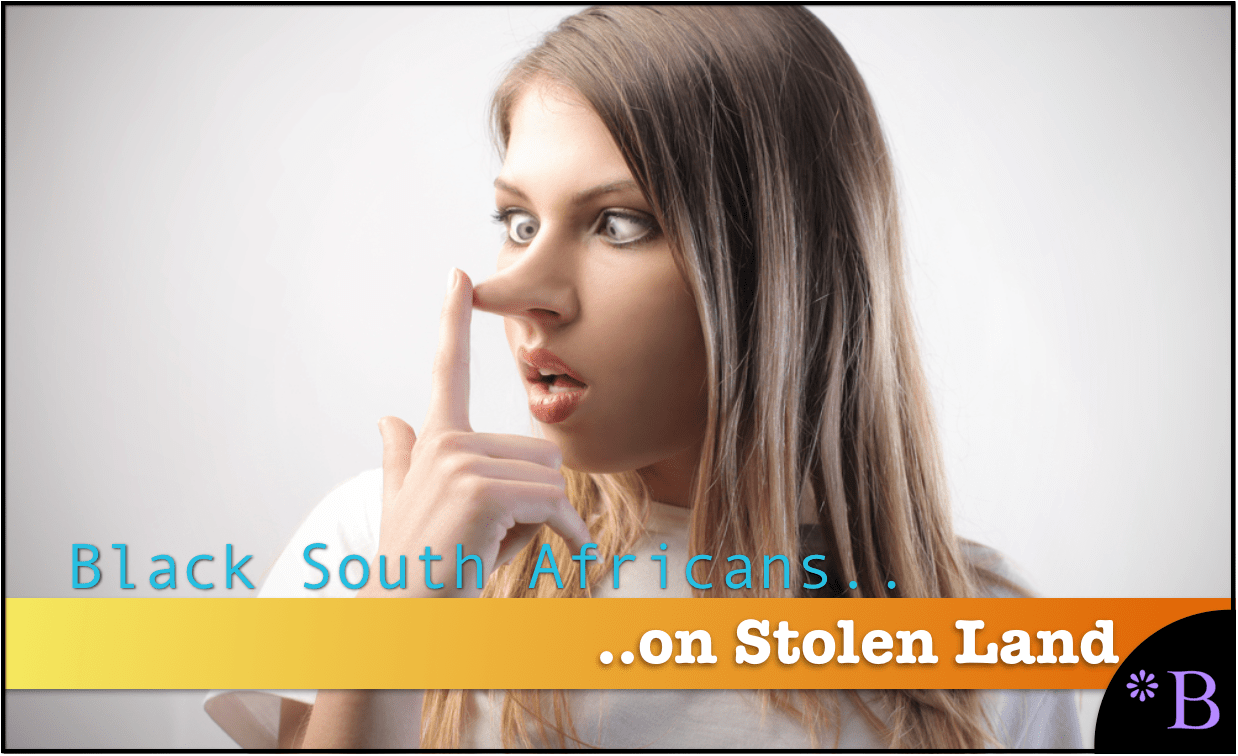 The following quotation describes this.

“When the Dutch landed at the Cape in 1652 the Xhosa lived right at the southern border of what is now the KwaZulu-Natal province. There is a simple way to realise that. The key rivers that formed borders between white and black in the 1800s, the Kei and the Keiskamma ( both EAST of the Great Fish River border) had KHOISAN NAMES, not Xhosa names. What does that tell an intelligent human being? Perhaps this young lady can name me a river anywhere between Cape Town and Port Alfred that bears a Xhosa name. She cannot, OK? It took literally 50 years– two generations– for white and black to first meet each other overland in 1702. That happened around 600 miles east of the Cape… and I can provide the names of the people. It took until around 1780–one hundred and thirty years–for the first war between white and black, and it took place SIX HUNDRED miles east of Cape Town.”

The history of Southern Africa long before the Europeans (and yes, there is a long before) is a fascinating tale of competing kingdoms, shifting alliances, and territorial disputes. We spent some time with two volumes published by UNESCO in 1992. Wars among the people labeled black today played out before and after the Europeans arrived. As it turns out, the Dutch dropped down in a fairly peaceful area.

The Dutch East India Company established a toehold in Cape Town on the southwestern tip of modern South Africa. There, they encountered a group called the Khoikhoi who used the land to graze their cattle.

From the start, the Dutch treated the land as theirs.

On May 10, 1656, the outpost’s commander Jan van Riebeeck described his dealings with a Khoikhoi leader.

Cape Town’s original purpose was simply to resupply merchant ships headed to the East Indies, but over the decades, settlers turned to farming, which put them in conflict with the original inhabitants. By the end of the 1700s, a series of wars broke out with the Xhosa, a larger and more formidable foe than the Khoikhoi. Ultimately, under the British, the Xhosa were defeated in 1853.

Politifact seems to miss the time gap between the Dutch’s arrival and the first Dutch African war. It appears to have completely missed them.

As pointed out, it was one hundred and thirty years. Didn’t Politifact think this gap in time between the Dutch’s arrival and the first war with blacks in the region was a bit odd?

As we have covered, only around 17.5% of the current black population of South Africa is descended from the Xhosa and the Khoikhoi tribes (adding 1.5 M for safe estimation). Their ancestors lived in what are other African countries today, like Zimbabwe, Botswana, etc.. South Africa has seen continual immigration from other African countries — and during the apartheid time — because South Africa provided better opportunity — under apartheid and after — than other countries in Africa run by blacks. This is another observation missed by Politifact that apparently stopped their analysis of the situation as soon as they found two African tribes in the Cape. Politifact is incorrect. Most Dutch and many of the English and French ancestors of current white South African descendants proceeded most of the black South African population.

This video covers the Khosi-San African tribe. Notice the map from the video. 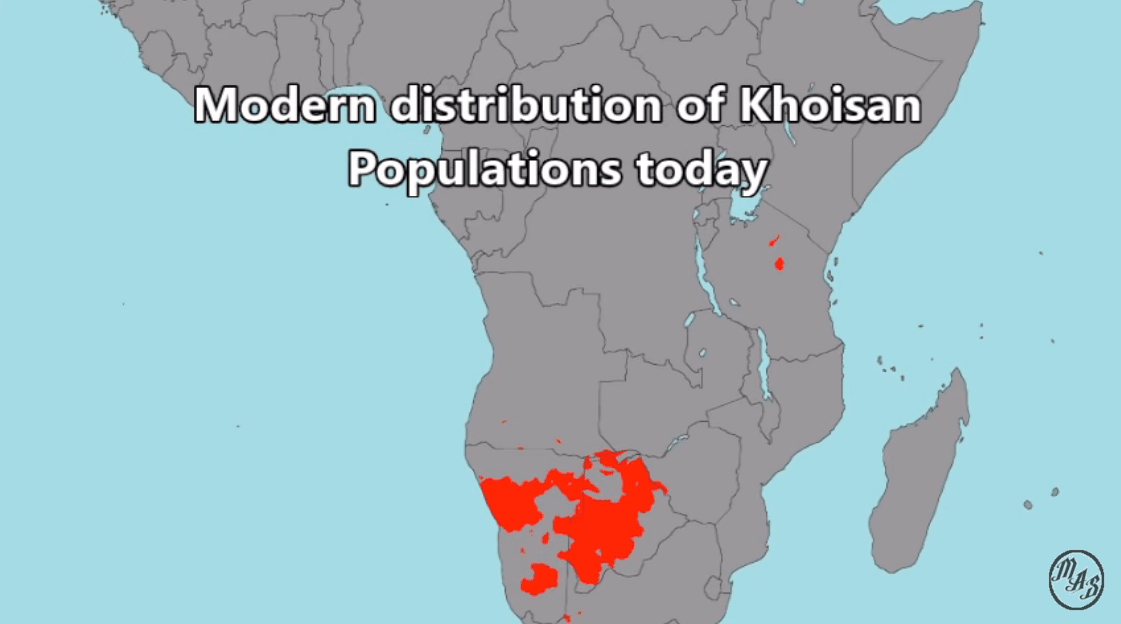 Modern Khoi-San tribes barely live in what is now South Africa today. They are primarily in Botswana and Namibia.

The black South Africans of significant numbers that claim South African land through ancestry are the Xhosa. They are explained as follows.

Presently approximately 8 million Xhosa people are distributed across the country, and the Xhosa language is South Africa’s second-most-populous home language, after the Zulu language, to which Xhosa is closely related. – Wikipedia

Under this logic, a Zimbabwean who illegally immigrates to South Africa tomorrow has can immediately begin agitating for “his” land to be returned to him. And his claim should apparently be respected because he is black. This brings up the following question.

This is pure racism, and it is not challenged as long as the racist is not white.

How Black South Africans Flipped the Script of History

Black South African’s keep the myth that when the Dutch arrived, it was populated with the current Africans’ ancestors. The narrative is that the whites stole land from them. But the vast majority of black South Africans weren’t there at the time. Their ancestors were north of this area. At the time of Dutch arrival, the original inhabitants were the Khoisan, and there were also very few of them.

The Africans who live in South Africa today migrated to South Africa to get jobs in the society that the European settlers created. However, present-day Africans claim that all white land ownership is based upon theft, and the EFF wants all land taken from whites and redistributed to Africans. Even when repeatedly contradicted, black South Africans continue to latch onto this story. Black South Africans see all property as land and do not recognize intellectual property or why South Africa ever developed into what it became was that Europeans settled it. Similarly, Australia would not have any tall buildings or roads today if Australians had not settled it. None of this is to endorse blacks’ mistreatments, but both things can be true at the same time. The rather surprising thing is that even under apartheid, SA had a long-term problem with illegal immigration from African countries north of SA.

This means that Africans greatly preferred moving to a white/European-based system as second-class citizens than staying in their own African-run countries. Within one or two generations, the African migrants changed the storyline to be that the whites had not allowed them into the country (and most of them coming illegally) but instead had stolen their land where they had been for thousands of years. This has led to more calls for the redistribution of land, as the following video shows.

The ANC has been unable to do anything but go backward. One black South African says she wants the same as white people. But does she mean all of the white conveniences that her society never developed? Most of the blacks in South Africa are not from South Africa — they willingly came to South Africa, leaving their land in other African countries. There has been some dispossession of land owned by African tribes owned by whites, and that land should be given back. However, that is not the majority of the land issue.

What black South African farmers excel at is complaining, but not farming. They continually reach out to the ANC to assist them and to show them how to farm, but the ANC is in free fall and does not have the resources. All they can do is expropriate land. Black farmers and the rest of black South Africa think the ANC had some plan. But they do not. Their short-term objective was to take over the government so they could rob it. The ANC is now known for having large numbers of incompetent black South Africans who have no idea what they are doing, further driving South Africa into the ground.

Black Africans have stated they want to take over white farms, but they have proven terrible farmers. Most of the farms taken over by black South Africans are defunct. This same thing happened in Zimbabwe.

After a while with black-run farms, Zimbabwe began begging white farmers to come back, as they became a food importer without white farmers. The new black run Zimbabwe had to put on a brave face and come up with a story to cover this reality. They went with “importing farmers is necessary for capitalism.” 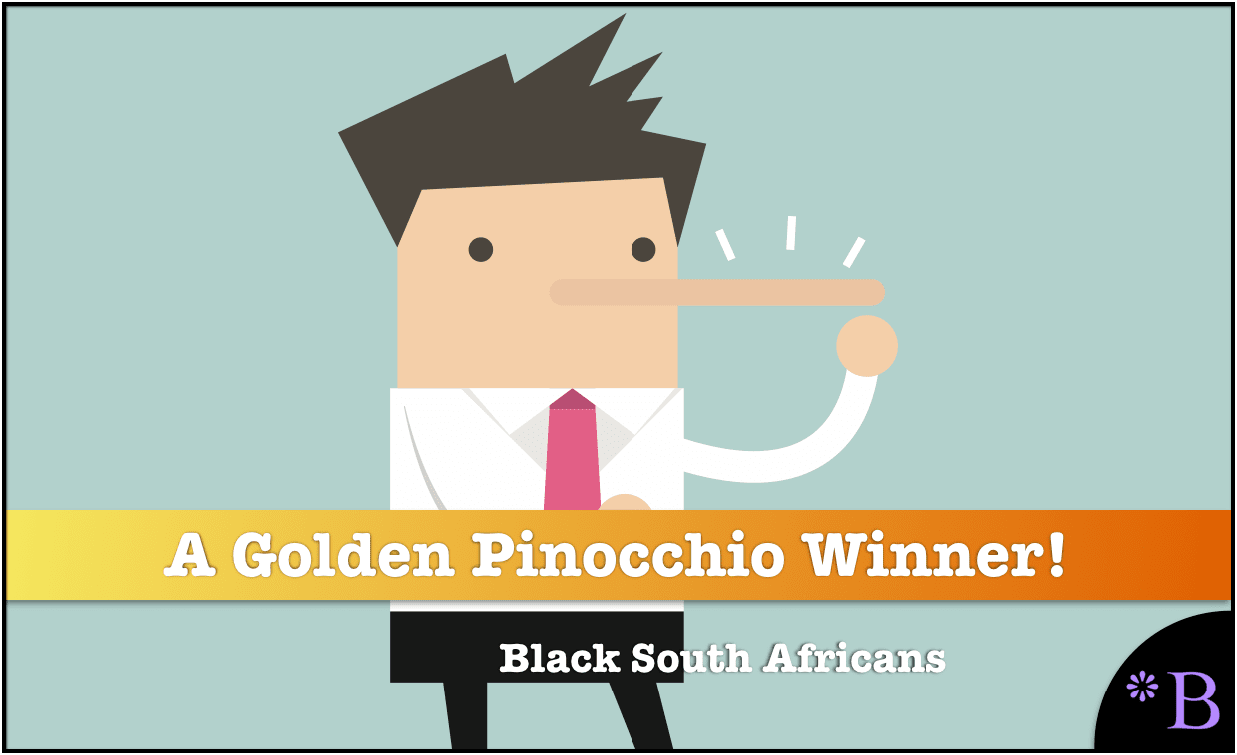 Black South Africans receive our Golden Pinocchio Award for the false claim that they were in South Africa before the white settlers. Therefore, this land actually belongs to them.

Internationally blacks are becoming more assertive regarding what they consider land property rights. Blacks in all of Africa often want to immigrate to Europe, which is historically European or white. And if Africans aren’t allowed in, they typically claim racism. Blacks have a double standard at work — which is that historically white countries need to become diverse (which translates into non-white), which means that whites need to be accomodating to non-white migration. However, in the very unusual circumstance where whites migrated to an area that was in Africa, the story changes. Now

Africa is for Africans and whites need to get out!

And when the whites do get out, as is in the case of Zimbabwe, things then go downhill very quickly. Zimbabweans are one of the major groups that immigrate illegally into South Africa.

South Africa is a good example of why you do not want large amounts of black immigration into your country. This is because, within a generation, blacks begin to manufacture their own history where they were there before the country to which they immigrated. This is also happening in the US, where false history promoted by blacks (in fact false current events — such as the false claims about police disproportionately killing blacks) are being used to gain power. Whites follow a flawed strategy when they attempt to engage with blacks using a rational thought process. Blacks are not interested in “white logic.” They do not follow a rational model in either South Africa, Africa more broadly or the US.