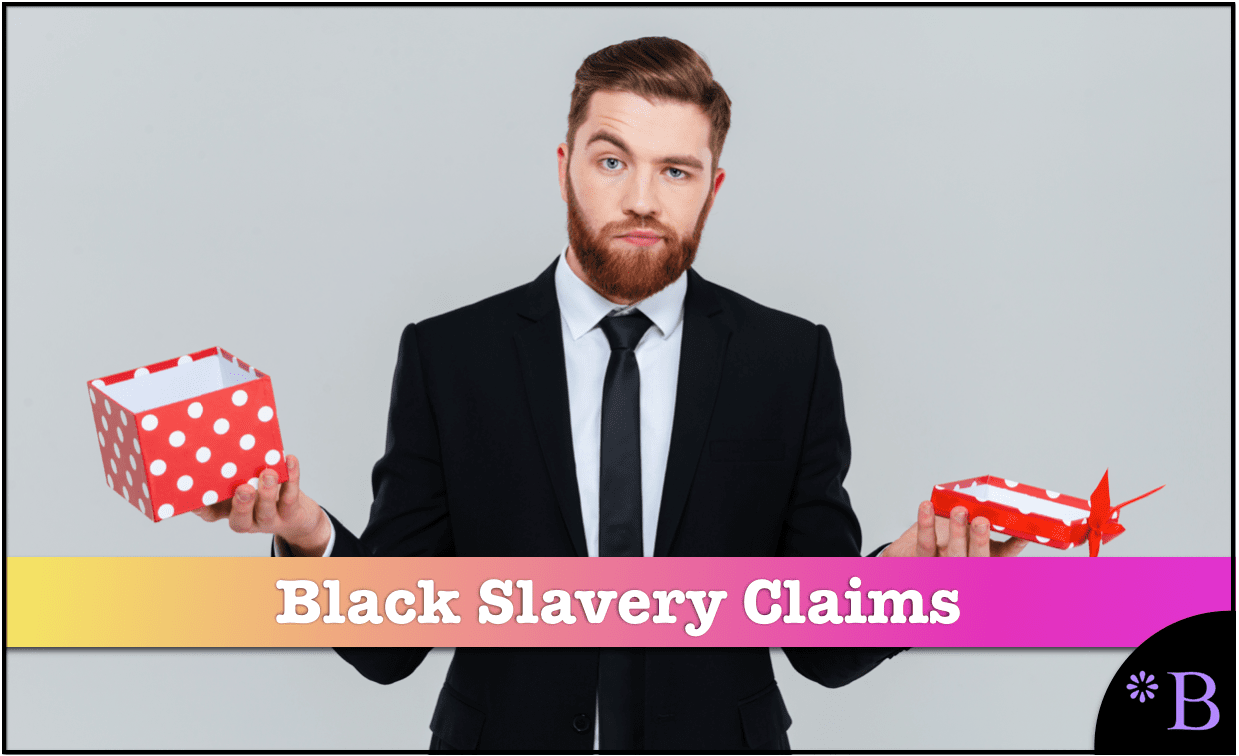 They further say that they were only interested in learning about how many slaves went to the US. Observing the entire slave trade, including both the Atlantic Slave Trade and the Arab Slave Trade, minimizes the “experiences” of their ancestors.

The Distinction Between Research and Self Centered History

I am a researcher, so these comments do not make sense to me. But I come from a Western European tradition based upon communicating accurate information. Blacks do not appear interested in history from what is correct but instead score political points. This debate has illustrated to me how blacks, even those that have lived in white countries for generations are not part of Western Civilization and have not internalized the values and ideas that make Western Civilization so different.

Blacks Ask That I Please Do Not Bring Up Arab Slavery?

Is Slavery A Uniquely White Institution?

It appears that the commenters want to frame slavery as a uniquely US phenomenon and want whites to be framed as unique in their involvement in slavery.

One would think that blacks would want the world to know about the largest enslavers of Africans of all time, which is Arabs and which is routinely lied about as I cover in the article How Muslims Lie About the History of Islamic Slavery or the fact that slavery (now mostly of other races other than blacks) has never stopped in many Muslim countries as I cover in the How is Trickle-Down Economics Working for the Arab Slave States? article Did Slavery Ever End in Arab Countries?

However, blacks do not want the 1200 years of Arab slavery of Africans known at all.

Slavery, and sex slavery, in particular, was a major motivating factor and was designed that way by Mohammed. Muslim leaders followed him for at least 1200 years, as I cover in the article Why is Slavery Such a Central Component to the Spread of Islam? Islam is the only religion I ever research that was explicitly spread in great part by the motivation to take sex slaves, as I cover in the article The Sex Motivation of Islam and its Sex Slavery.

If one looks at the promise made to those that martyr themselves in the name of Islam, the so-called 72 virgins, (which in reality is thousands of virgins) this is another story of sex slavery, but sex slavery of the afterlife, as I cover in the article How Muslims Lie About Islam’s Promise of 72 Virgins in Heaven.

Should We Forget Arab Slavery to Keep From Being Critiqued by Blacks?

Blacks have emailed me complaining of my coverage of Arab slavery. However, why is Arab slavery of Africans, which had enormous death rates and involved sex slavery, far higher death rates than the Atlantic Slave Trade not important? This slavery resulted in most male slaves being castrated which explains why there are so few blacks in the Middle East from this slave trade today. Why is this not only not of interest to blacks but something blacks actively suppress?

The only logical conclusion I can come to is that blacks do not seek to race scam Arab societies, and as they don’t feel like they can use that history, they don’t want it discussed.

Many media entities and black leaders’ presentation concerning slavery is false. For some reason, blacks who have never read anything about slavery consider themselves experts on slavery, as I cover in the article Why Do Most Blacks Consider Themselves Experts on Slavery?

However, knowledge on slavery does not flow to people based on their race. One has to read on the topic, and the reading can’t be entirely about what parts can be cherry-picked to scam another group of people. This is at least one reason why most of the material written by blacks on slavery merely contributes false information to the general topic.

Making Spurious and Unsupported Claims About the Legacy of Slavery

Blacks along with left-leaning whites have come to use the made-up term the “legacy of slavery.” This is where black failings ranging from high illegitimacy rates or sexual predation by black men of women are blamed on this “legacy.” The rise of black illegitimacy, as pointed out by Thomas Sowell, dramatically rose when programs were introduced that made it advantageous for people to not be married to receive aid to dependent children, and illegitimacy was far lower among blacks a hundred years ago, than it is today.

Outlets like the NYT or The Atlantic spread the term “legacy of slavery” like butter over bread without demonstrating a relationship. It is part of PC culture that if you claim that something is related to slavery, you can’t be contested, as the other person is being “un-PC,” and this means you don’t have to waste any time understanding the topic or putting in the work to support the claim.

How Blacks Reduce the Emphasis on Eliminating Worldwide Slavery

Today, there is widespread modern slavery in many countries, including India and Africa, however, the incentive to reduce this slavery is minimized by the strange perspective that slavery is somehow less egregious and not much of an issue is the slaver is not white as I cover in the article Is It Slavery if the Slave Owner is Not White?

After seeing much of the coverage of slavery, my observation is that slavery is not considered slavery, or at least not the type of slavery that anyone needs to pay much attention to if the slave owner is not white.

I could immediately emphasize reducing slavery by merely moving to India or Africa and being filmed purchasing slaves. This would transfer the ownership from a non-white person to a white person. If I sent the videotape to CNN, I would create an immediate firestorm, as that racialized stereotype of slavery would be reinforced. My website would receive many comments telling me how “disgusting I am,” meanwhile, before I went and made the purchase from existing slave owners, no one cared. It would be very easy to raise money from people to stop me from owning slaves, money that would not be forthcoming if the slaves stayed with non-white slave owners.

And this brings up the following question.

Does Slavery Matter if the Slaves Were or Are Not Black And the Slavemaster is Not White?

How the Establishment Left Media Provides a False Picture of Slavery

One of the critical observations of the related articles at the Brightwork Research & Analysis site is that the current presentation of slavery to the general population is a form of manipulation of history to derive a perceived outcome. Most of the mainstream articles that exist say in The New York Times or other popular media are written to communicate how unique the experience of slaves in the US was, when in fact, it was not unique. Slavery did not even begin to be contested until 1780, and it was only challenged in European countries in the beginning. The country that stood out in opposing slavery and starting the abolitionist movement was not black, it was England, as I cover in the article Why Are the British Efforts to Stamp out West African Slavery So Little Known?. It was from England, not an African nation, that the abolitionist movement spread worldwide. I performed an analysis and found that the more colonial influence the African country, the less modern slavery it has, as I cover in the article Why Do the Most Europe Influenced African Countries Have the Least Slavery?

This calls into question the claims by Africans that colonialization only brought terrible things to African countries or that it increased rather than decreased slavery.

Slave trading is standard in many parts of Africa. However, it is done by non-whites, and black readers have asked me not to cover these topics.

Sudan has done little to stop slave trading because slave trading is accepted in Sudan. The world does not care much, and it is not considered newsworthy if it does not fall into the white-black stereotype.

Muslim societies, in general, widely accept slavery. However, black Americans never critique this, as they prefer to talk about slavery in white societies hundreds of years ago.

It is not black countries that pressure black, Asian, and Muslim/Arab countries to stop slavery practices, and it is predominantly white countries. Where white countries bear significant responsibility is for not policing where items are manufactured, modern slavery in Asia is tied directly to providing consumer goods to the US and Europe, as I cover in the article How Multinationals Support Slavery and Slave Like Workers. However, while we see blacks talking about slavery in white societies that ended hundreds of years ago, I can’t recall much concern on the part of black authors for modern-day slavery, particularly if those slaves are in Asia making things for global consumption.

Furthermore, there is the ability to comment on this article. Anyone who is confident in their knowledge can comment as to what parts of this article are inaccurate. However, commenters who have stated their objections to the content, have not provided me with evidence for why the articles are false but instead discussed why the articles are not what blacks want to be published.

Blacks seek to control the research and coverage of slavery as they feel they own the topic, even though slavery up until recently was accepted everywhere. Blacks seek to erase people who were slaves in history simply because it suits their political agenda. All of the left-leaning media entities have bent to this black influence to adjust their coverage so that it is inaccurate but maximally compliant to the black needs for inaccuracy. The black influence on accuracy and freedom of speech has been entirely negative. This led the NYT to create The 1619 Project, which, among other claims, stated that the US became a country in 1619, not as commonly thought in 1776 with the Declaration of Independence, but in 1619 when the first slave and the “first black foot,” touched the continent. This also means that the Revolutionary War was fought without cause, as the US had already been the US for 158 years. This is what happens when blacks become involved in writing history.

This ridiculous and historically false video was produced by the BBC but was motivated by blacks in England. Apparently, it is “hidden wisdom” that blacks were prominent in European royalty for hundreds of years, something British historians have completely covered up. They were deliberately “erased from history.” And notice blacks were, according to the video secretly part of British nobility.

I can produce many data points that indicate blacks do not appear to have any accuracy concerns when it comes to history. But for some reason, black historians have not yet proposed that Japan’s royalty also contained large numbers of blacks and that perhaps a number of Japanese Emperors were also black. Blacks are very specific about targeting only white societies for their rewrites.

The Desire of Black Censorship of History

It is at this point very clear that the majority of blacks support a highly censored history on the topic of slavery that allows them to distill the entire history of slavery down to the relatively short period in history when blacks were owned by whites, and that during this time, all slavery occurring at that time is covered up.

The demands of blacks to alter history are enormous, and here are just a few of the demands.